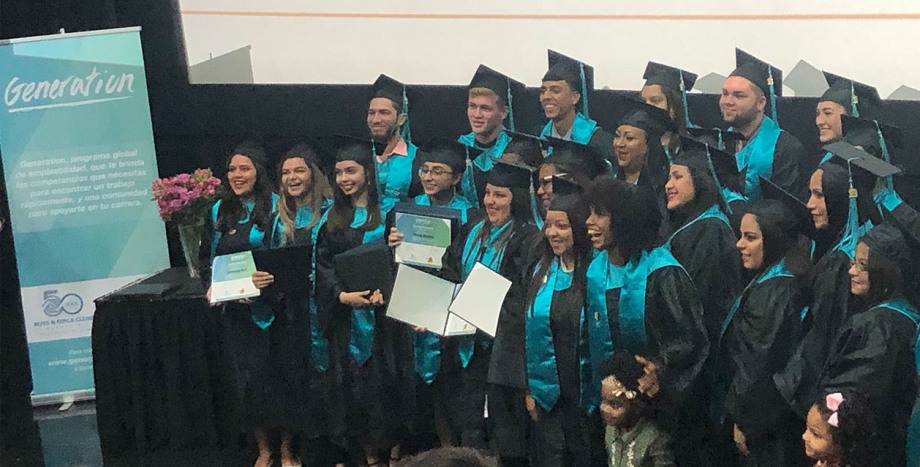 Graduation (and proposals) Take the Stage

Twenty Generation Hospitality students took the stage at the Caribbean Cinema Fine Arts Theatre outside of San Juan, Puerto Rico to celebrate their graduation in December. Little did they know that for one graduate, a new chapter of her life was about to begin.

After five weeks of hard work, it was time to celebrate. Local leaders, employer partners, family, and friends all attended the graduation ceremony, cheering each graduate as they walked across the stage to receive a Generation diploma.

“Listening to the student speeches at graduation, it was clear that the cohort had experienced a tremendous amount of personal and professional growth over just a few short weeks,” said Rachel Shannon, Generation program delivery partner lead.“The students spoke about how their mindsets had shifted and the hope and ambition they had to begin their careers was palpable.”

For graduate Jazmin, the emotional experience at graduation became even more meaningful during a photo session with her classmates. Families and friends were taking group photos of the graduates when Jazmin’s partner approached the stage and got down on one knee.

The crowd of graduates and their supporters all cheered as Jazmin said “yes.”

“Jazmin was thrilled and surprised,” said Karthik Khajana, Generation staffer. “Her classmates were so happy for the couple.”

Graduates in the program spent five weeks engaging in intensive training to prepare for roles in the hospitality and customer service industries. Classes, hosted at the Boys and Girls Clubs of Puerto Rico, included lessons on effective communication, using point of sales systems, and time management. With sessions that combine technical skills, behaviors and mindsets, Generation graduates are prepared to be effective members of a hotel or restaurant hospitality team from day one.

In addition to time in the classroom, Generation works with students and partners to build a strong sense of community and support.

“The students were a cohesive group that really supported and cared for one another,” said Khajana. “The enthusiasm and willingness to push themselves really stood out.”

As Jazmin and her fiancé plan their wedding, Generation and the Boys and Girls Clubs of Puerto Rico team are planning for an exciting year of learning.  The next cohort of students will begin training on Feb. 19 and applications are open for upcoming cohorts throughout 2019. For more information about the Hospitality program, visit usa.generation.org/hospitalidad.

Generation – Stories from around the World